In April, the Brooklyn Nets were eliminated from the playoffs by the Boston Celtics.

Boston was led by first-year head coach Ime Udoka, who had become the darling of the NBA because of a rags-to-riches backstory of climbing the ranks to finally land an NBA head coaching job. The Nets were led by Steve Nash, who says that he had “skipped the line” in getting his head coaching job.

Seven months later, in a head-spinning swirl of events, Nash is out as head coach, and — more incredibly — according to multiple sources, Udoka will replace him.

What makes the story so head-spinning is that two months after leading Boston to the NBA Finals, Udoka was suddenly and unceremoniously suspended because of an inappropriate relationship with a team employee.

The fact that the Nets even considered Udoka smacks of desperation and poor, if not misguided, judgment. Why would a franchise that is already up to his ears in controversy even think about hiring someone who was suspended for sexual misconduct? Seriously?

Apparently, the Nets do not care about being found guilty in the court of public opinion. 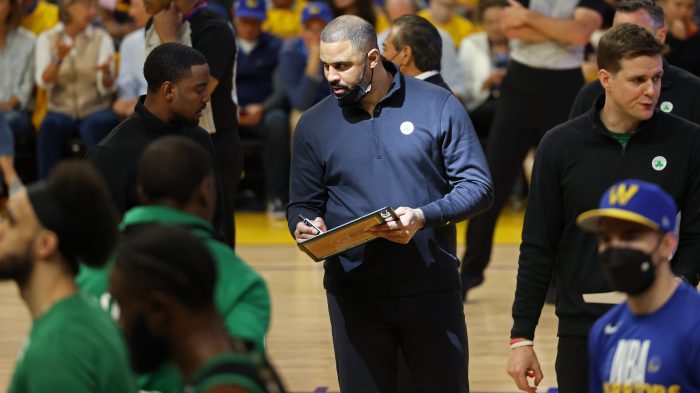 For the last week, the Nets have indulged its loose cannon guard Kyrie Irving, who made news — once again — for all the wrong reasons. Last week, Irving tweeted support of an antisemitic documentary and a supposed “New World Order” conspiracy theory. In the process of going down this bizarre rabbit hole, Irving, wittingly or unwittingly, aligned himself with Alex Jones, the Infowars host, whose latest trope suggests that government employees want to enslave the human population by releasing viruses, among other methods.

In August, a Texas jury awarded $49 million to the parents of a Sandy Hook shooting victim who sued Jones for defamation. Jones claimed that the shooting that killed 20 first graders and six educators in 2012 was part of a government-led plot to confiscate Americans’ firearms. On Oct. 12, a Connecticut jury ordered Jones and his company, Free Speech Systems, to pay $965 million in compensatory damages to families of eight Sandy Hook victims and an FBI agent who were subjected to harassment and threats resulting from Jones’ lies about the school shooting. This is who Irving embraced.

On Wednesday, Irving the Nets and the Anti-Defamation League released a joint statement saying Irving and the Nets will each donate $500,000 “toward causes and organizations that will work to eradicate hate and intolerance in our communities.”

Nets owner Joe Tsai said he was “disappointed” in Irving, but Irving is still on Tsai’s payroll, not because of his intellect, but because he remains one of the top performers in the NBA.

Irving missed nearly half of last season because he refused to be vaccinated against the coronavirus. In the past, Irving has also maintained that the world is flat, or at least has debated that the world is round. Decades ago, before lies and untruths traveled at the speed of light, irresponsible statements like this would die insulated, isolated deaths. Not today. Every unsubstantiated racist, misogynist, antisemitic statement goes viral in an instant and is used as fuel by whichever group subscribes to those beliefs.

But this isn’t about Irving. It’s about the Nets. Irving is merely a symptom of the chaos that Udoka will inherit when he succeeds Nash as the Nets head coach. Udoka, a former Nets assistant coach, will be called on to stabilize a listing ship. But, alas, it’s not just the ship that’s listing, it’s a franchise that has been trying to find its footing for decades in a city owned by the New York Knicks.

In many ways, the franchise is star-crossed.

The Nets were founded as the New Jersey Americans in 1967 as an original franchise of the American Basketball Association, a rival to the NBA. They relocated to Long Island, New York, in 1968 and became the New York Nets and won two ABA titles. My introduction to the Nets came in 1975 when I profiled Julius Erving — the incredible Dr. J — for Ebony magazine.

A year later in 1976, the Nets and three other ABA teams were admitted into the NBA as part of a merger. Problem was, the Nets were required to pay a $4.8 million “encroachment fee” to the Knicks. They raised the money by selling Dr. J to the Philadelphia 76ers. Hence the beginning of what I call the curse of Dr. J.

The franchise has been haunted by one misstep after another — separated by an interlude when they reached back-to-back NBA Finals as the New Jersey Nets.

In 2013, the Nets sent a boatload of draft picks to the Boston Celtics for aging stars Kevin Garnett and Paul Pierce. The Nets were fleeced. With two of the draft picks the Nets traded away, the Celtics selected Jaylen Brown and Jayson Tatum.

In January 2021 in a blockbuster four-team deal, the Nets traded with the Houston Rockets for James Harden. By the end of the season, Harden, apparently weary of Irving’s unpredictability and lack of availability, lobbied for a trade.

In February, little more than a year after Harden arrived in Brooklyn, the Nets traded him to the Philadelphia 76ers, where apparently he wanted to be all along. In retrospect, the Nets exchanged a malcontent (Harden) for an enigma, guard Ben Simmons, who they received as part of the trade. 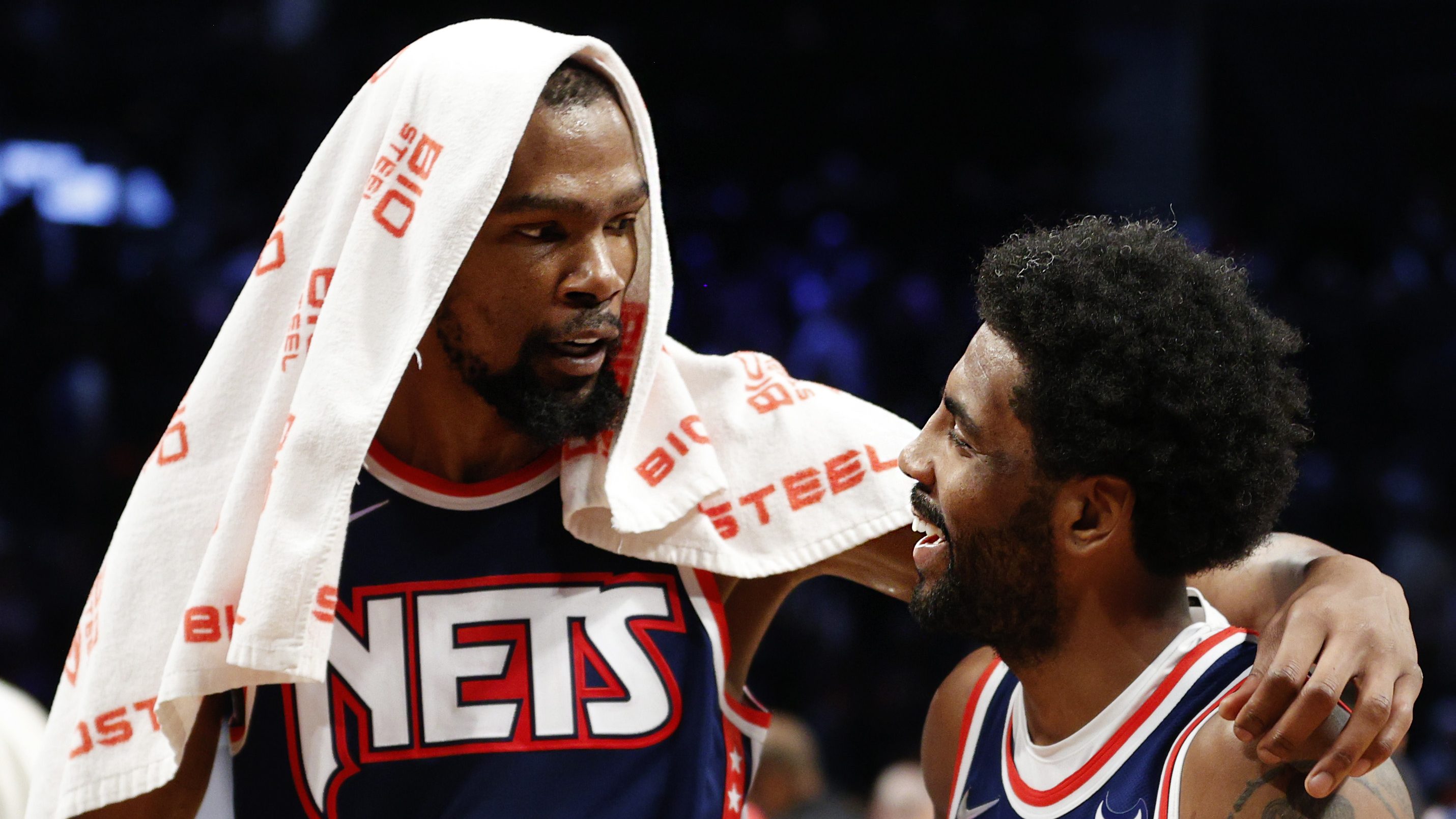 Player empowerment in the NBA is good, but not for everyoneRead now

Simmons, a onetime rising star, became a pariah by the time he was traded from Philadelphia, where he was chastised as being soft, timid, emotionally fragile and a malingerer. He never played a game for the Nets last season, and two months after his arrival in Brooklyn, Simmons was scratched for the season because of a herniated disk.

Still, the Nets reached the postseason. With Irving finally in the lineup and Durant carrying the lion’s share of the load, the Nets limped into the playoffs against Udoka’s Celtics and fought valiantly before being swept out. The Celtics went on to reach the NBA Finals, where they lost to the Golden State Warriors in six games.

Never in a million years could Udoka have thought that five months later he: a) would be out of a job; and b) would be rumored to replace Nash as the Nets head coach.

But here Udoka is, apparently, and here are the Nets, 2-6 after eight games.

Udoka surely jumped at the opportunity. He had to: He is damaged goods now. Indeed, the Nets are a lifeline for a head coaching career that seemed to be on the rocks.

But in joining the Nets, Udoka will be falling through Alice’s looking glass. He inherits a team with an aging superstar in Durant. Over the summer, Durant called for the Nets to fire Nash and general manager Sean Marks. He’s only gotten half his wish. Durant may also be wishing that he had never followed Irving to Brooklyn.

Udoka also inherits the struggling Simmons, and Irving — a talented, injury-prone conspiracy theorist who believes the world is flat.

It’s what you call jumping from the skillet to the proverbial frying pan.

William C. Rhoden, the former award-winning sports columnist for The New York Times and author of Forty Million Dollar Slaves, is a writer-at-large for Andscape.