All eyes were on Neymar before Brazil’s opening game at the 2022 World Cup but it was Richarlison who was the hero in the 2-0 win against Serbia.

The Tottenham striker struck twice after half-time, the second an acrobatic scissor kick after teeing himself up inside the penalty area, to give the world No 1 ranked side the perfect start to their campaign in Qatar.

Serbia had defended superbly to keep Brazil out for the first hour at the Lusail Stadium but the quality of Tite’s side shone through eventually.

How could you take Richarlison out of the team now?

When you have Richarlison in your starting XI, you know what you’re going to get — industry, energy, constant running. His involvement against Serbia was limited, but nine goals in his last seven international games is a return you associate with O Fenomeno himself, the original Ronaldo.

Richarlison’s 25 touches were the fewest of any starting outfield player before he left the field. He was low volume, but maximum impact.

Richarlison’s second goal in particular was outstanding, controlling a cross from the left in a crowded penalty area and setting himself up for an acrobatic volley past the Serbia goalkeeper Vanja Milinkovic-Savic. The two goals will undoubtedly keep Richarlison in the side when Brazil face Switzerland next week, but it’s worth noting that they do have strength in the central striker department. Arsenal’s Gabriel Jesus has made a great start at new club Arsenal, Real Madrid’s Rodrygo has shown his quality in central areas for his club, and Flamengo’s Pedro has had a strong campaign fresh off the back of a Copa Libertadores win.

Richarlison is leading that pack. Brazil weren’t at their scintillating best against a battling Serbia, but one man was the difference. Brazil’s No 9 shirt does not weigh heavy on his shoulders.

Serbia did great job frustrating Brazil for an hour

There was a moment early on in the game when Vinicius Junior dropped a shoulder, turned on the afterburners and slipped away from Serbia down the left — but in the first hour that was a rare example of Brazil hurting their opponents with their hottest young talent.

What Tite craved was more opportunity for Raphinha and Vinicius to isolate Serbian players out wide and either attack them one-v-one or collect possession in behind and run riot in open space. The scope to do that was limited against firm resistance and in the absence of Brazilian full-backs overlapping.

It said something about Serbia’s discipline and drilled shape that Vinicius’ best chance fell to him via a clearance which Nikola Milenkovic drove against his own face accidentally. As for Raphinha, the clearest openings for him came through a slick move which played him through the centre of Serbia’s defence, rather than around it, and via Dragan Stojkovic’s side passing themselves into trouble early in the second half. He made nothing of those great opportunities by failing to connect with his finishes properly.

There were knock-on effects as Richarlison found himself starved of possession until his tap-in and Serbia concentrated on nailing Neymar in the middle. Brazil’s persistence and class meant they came good and one-on-ones started to materialise, but here was a blueprint for making it tough for them to cruise into top gear.

The roar inside the Lusail Stadium was seismic when fans heard Neymar’s name called out before kick off. He is the main man, the player that people come to watch.

The pressure for Neymar to deliver is ultimately one that he embraces, in what could be his final chance to win a World Cup with his country.

How do you stop him? You double up — you triple up if you have to — and that’s largely what Serbia did, starting with the “reducer” laid on him by Strahinja Pavlovic after just five minutes. He was fouled nine times, more than any other player in the first round of games in Qatar. Neymar attracted red shirts with magnetic energy whenever he touched the ball, and for long spells Serbia were able to repel the force that Neymar offered.

Neymar was often coming towards the ball to do his damage, able to drift across the pitch but often found himself in the left half-space deeper than he or Brazil would have liked. 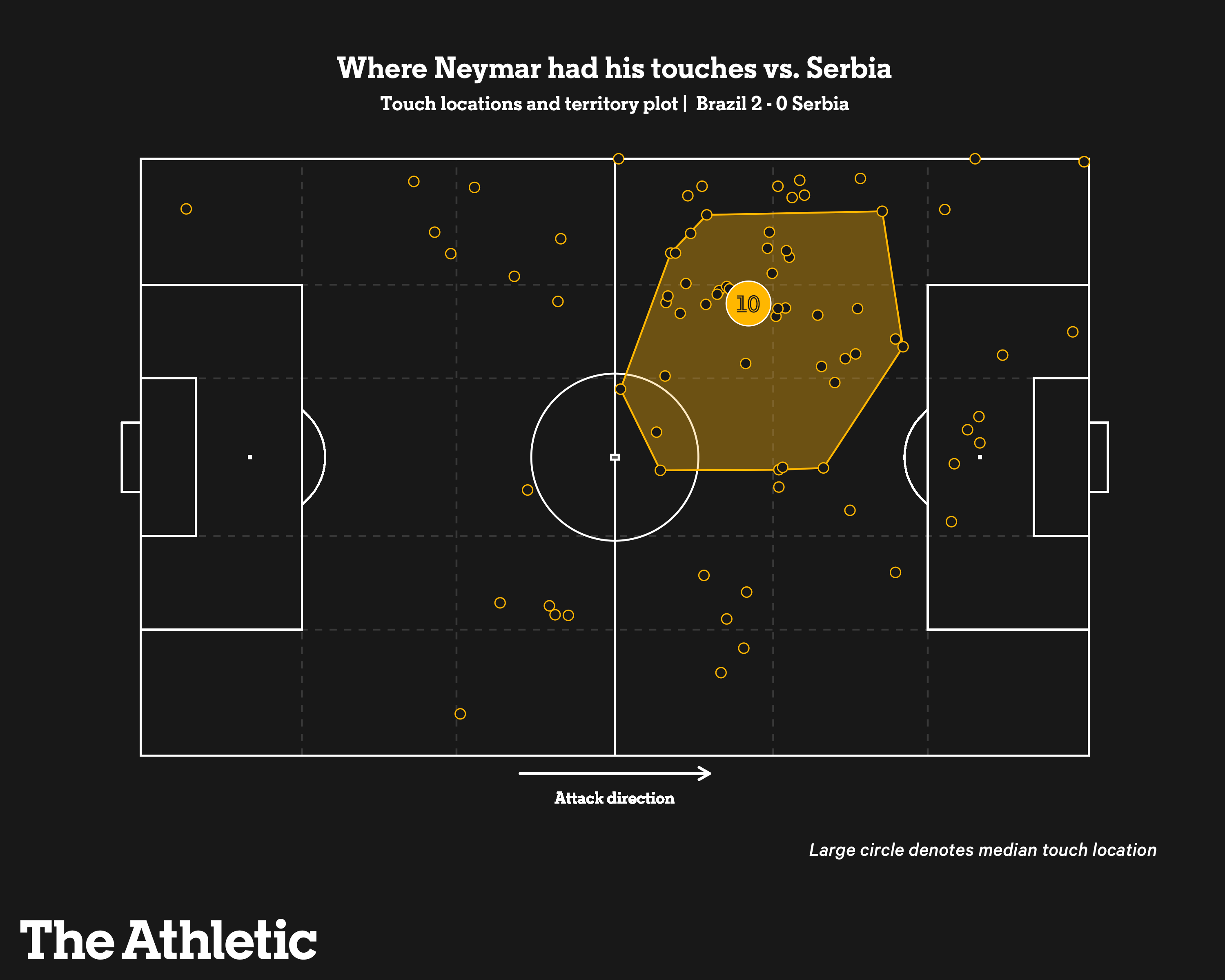 Neymar didn’t need to continue the red-hot form that he’d been showing for Paris Saint-Germain so far this season — with 11 goals and nine assists in 14 games — but he still remains Brazil’s biggest threat.

Was Mitrovic over Vlahovic the right call?

It should not have been too much of a surprise that Aleksandar Mitrovic started ahead of Dusan Vlahovic. After all, he is Serbia’s all-time leading goalscorer.

But it’s not always an either or question. Stojkovic has sometimes paired Vlahovic with Mitrovic, a fearsome double act.

Against Brazil though, Stojkovic went with one up top and there was uncertainty; both players had injury questions hovering over them pre-tournament.

Mitrovic played no part in a friendly against Bahrain before the World Cup, but Vlahovic did step off the bench. He radically transformed that game, assisting Tadic to give Serbia a 2-1 lead and then scored himself to double the advantage – all within six minutes of the restart.

Yet Stojkovic plucked for Mitrovic and it seemed effective in the first half. His hold-up play worked well, allowing Serbia’s wing-backs, Andrija Zivkovic and Filip Mladenovic, to advance up the field. He made 27 touches overall, which was actually two more than Richarlison, but tired in the second half. He missed runners off him though and the main issue was a poor final ball. At Fulham he averages almost five shots per 90 in the Premier League. Here, he did not have one.

With better service, Serbia could have capitalised on their first-half control. But it wasn’t to be.

Raphinha: from Brazil debut to World Cup starter in 13 months

Raphinha could be classed as a late starter or a quick developer. He was already 24 when Brazil gave him his debut last October (for context, Neymar made his aged 18) but 13 months was all it took for him to become a starter for Tite at the World Cup.

Similar to Leeds United, where his impact was like a bomb going off, he swaggered onto the international stage with five goals in 11 games for Brazil — but the clash with Serbia was not a contest which showcased him at his lightning best.

In the first few minutes of the BBC’s commentary of the game, pundit Martin Keown remarked that Brazil were seen by some as a side who failed to work hard enough out of possession. There is no need to worry too much about Raphinha on that front. He was Marcelo Bielsa-trained at Leeds and few teams cover more distance over 90 minutes than Bielsa’s or press as viciously as his.

Raphinha started by tracking back against Serbia, turning their back four into a back five and nullifying Filip Mladenovic’s crossing ability. But as time went on, that lapsed somewhat and he spent more and more time hovering on the right flank, looking for inviting possession. When Brazil got him clear, Pavlovic recovered with a brilliant sliding tackle.

There is more Raphinha can offer — and Brazil will need him to bring his A game at stages if the World Cup is to be theirs.

Serbia have not had a settled goalkeeper for some time. Since the retirement of the experienced Vladimir Stojkovic following the World Cup in Russia, Serbia have used 10 different goalkeepers.

Rotation has continued under Stojkovic and all three of their current squad, Vanja Milinkovic-Savic, Marko Dmitrovic and Predrag Rajkovic have featured under his tenure. Rajkovic, the 27-year-old who plays for Mallorca, has featured most — in half of the games since Stojkovic took over.

Vanja Milinkovic-Savic, the younger brother of Lazio star Sergej, is a former Manchester United player but never played for the club owing to a work permit issue. Now at Torino, the 25-year-old made his Serbia debut only last year and for much of his international career, he has played behind Rajkovic. He was on the bench for Serbia’s under-20 World Cup final win back in 2015, which Rajkovic started.

But he is now preferred. He has started Serbia’s last five games, and he showed why here. He made some crucial interventions, particularly in the first half, where he smothered Vinicius Junior smartly as he raced in on goal. In the end, he was unfortunate. He could do little about the two Brazil goals and afterwards, he came under fire. But the saves kept coming; a palm away to deny Rodrygo and then the same to repel Fred. He made six saves in total, from three efforts inside the box. His distribution was not perfect, but his shot-stopping contributed to a commanding overall performance.

It should be enough to keep the jersey, at least for now.