His victim, now-seven-year-old Ariel Young, was seen walking into the court room on Tuesday in Kansas City, surrounded by family members. Cameras in the area were careful not to capture her face, but did show her courthouse entrance from a distance. Young was seen wearing a shirt reading ‘Ariel Strong.’

Speaking to the court ahead of Tuesday’s hearing, Reid offered an apology to Young and her family.

‘Every time I see my daughter, I think about Ariel and how my decision affected her so deeply and her family,’ Reid said, as quoted by the Kansas City Star’s Sam McDowell.

Reid pleaded guilty in September to driving while intoxicated causing seriously bodily injury. The charge carried a maximum penalty of seven years in prison, but prosecutors said at the plea hearing they had agreed to ask for a maximum sentence of four years in prison.

Circuit Judge Charles H. McKenzie had the option of ignoring the sentencing agreement and giving Reid 120 days in jail and five years’ probation.

Prosecutors said Reid, the son of Chiefs Coach Andy Reid, was intoxicated and driving about 84 mph (135 kph) in a 65 mph zone when his Dodge truck hit the cars on an entrance ramp to Interstate 435 near Arrowhead Stadium on February 4, 2021.

Ariel, who was inside one of the cars, suffered a traumatic brain injury. A total of six people, including Reid, were injured. One of the vehicles he hit had stalled because of a dead battery, and the second was owned by Ariel´s mother, who had arrived to help.

Reid had a blood-alcohol level of 0.113 percent two hours after the crash, police said. The legal limit is 0.08 percent. 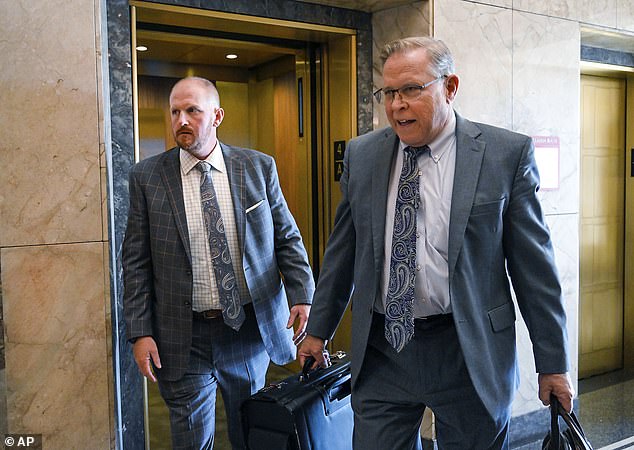 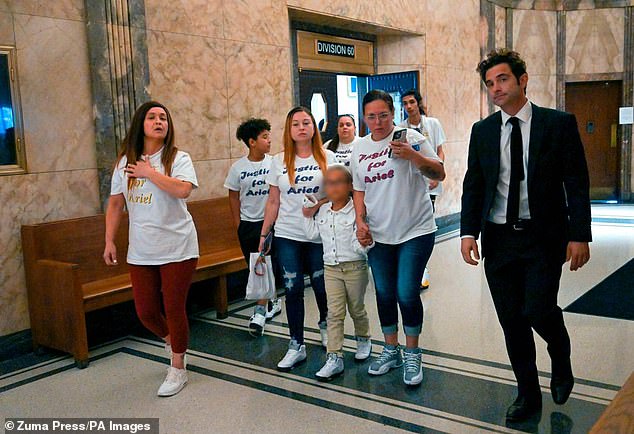 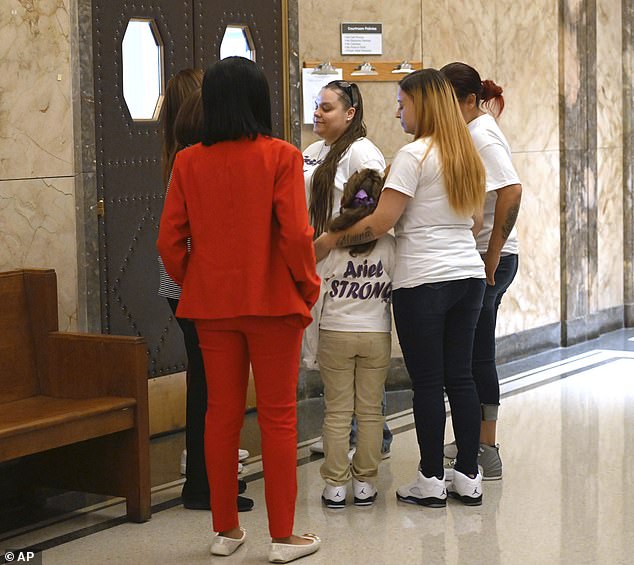 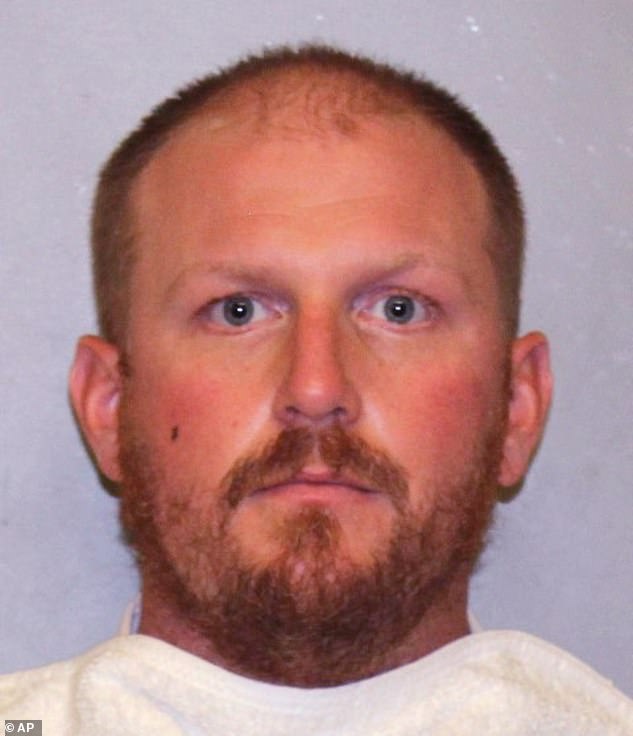 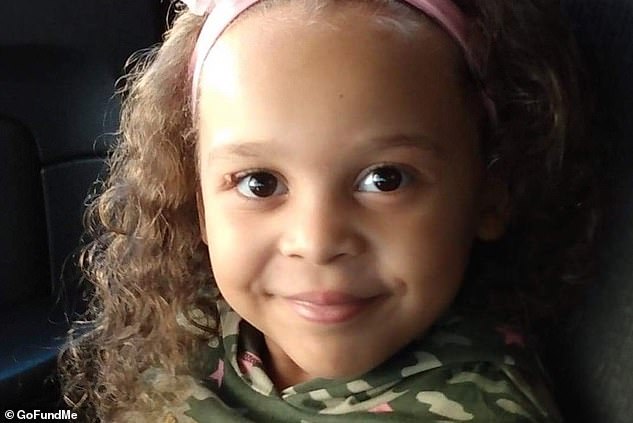 A girl in one of the cars, Ariel Young, who was 5 at the time, suffered a traumatic brain injury. Young returned home from the hospital in April of 2021, but was still struggling to ‘walk, talk or eat like a normal 5 year old’ in the summer of 2021, according to the family’s GoFundMe page. Young’s four-year-old sister was in the car, but not critically injured in the crash

NEW: Ariel Young, 7, walks into Jackson County court today ahead of the sentencing hearing of former Chiefs assistant coach Britt Reid. Reid pleaded guilty to DWI in a crash injuring Young in 2021. He is facing no more than 4 years in prison under a plea deal.@kmbc pic.twitter.com/U2rjeutnjI

Britt Reid walks to a courtroom at the Jackson County courthouse where he will be sentenced for pleading guilty to a single charge of felony driving while intoxicated and causing a crash severely injured a 5-year-old girl in 2019. pic.twitter.com/bNPPXLD3Qh 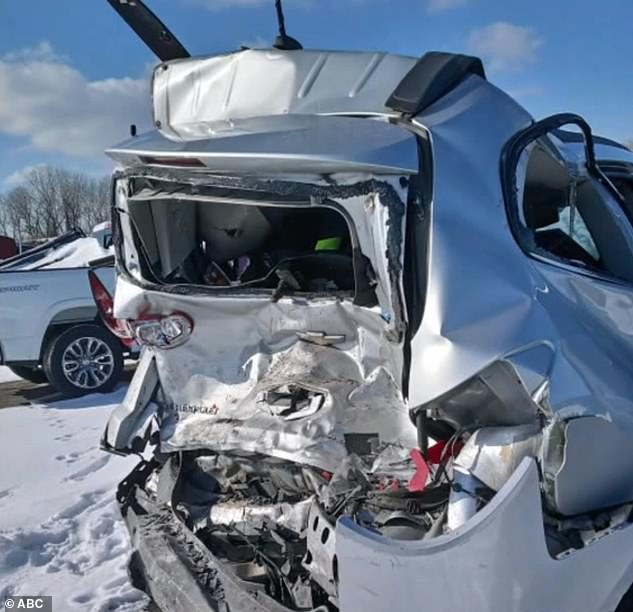 A picture of the wreckage from the February 4 crash that left Ariel Young, then 5, in a wheelchair. She has since regained the ability to walk

Reid’s attorney, J.R. Hobbs, asked in a sentencing memorandum that Reid be placed on probation, noting he had publicly apologized and was remorseful.

Ariel’s family opposed the plea deal and wanted Reid be sentenced to the maximum of seven years.

Reid underwent emergency surgery for a groin injury after the crash. The Chiefs placed him on administrative leave, and his job with the team ended after his contract was allowed to expire.

This is not the first legal issue for Reid, who graduated from a drug treatment program in Pennsylvania in 2009 after a series of run-ins with law enforcement. His father was coach of the Philadelphia Eagles at the time.

The Chiefs reached a confidential agreement with Ariel’s family in November to pay for her ongoing medical treatment and other expenses.

In September, Reid acknowledged to the court that he was drinking on the night of the crash.

‘I really regret what I did,’ Reid said. ‘I made a huge mistake. I apologize to the family. I didn’t mean to hurt anyone.’ 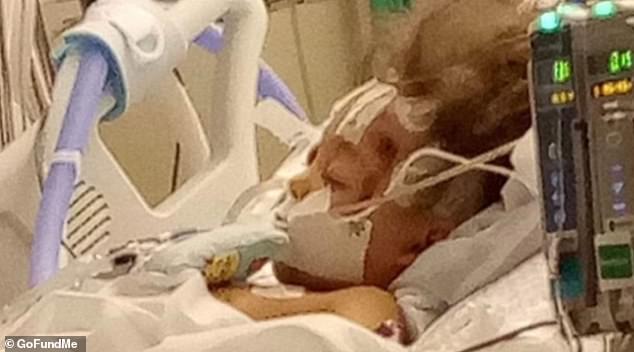 Young, who is now home from the hospital (pictured), suffered a traumatic brain injury in 2021

‘The five victims of this crime are outraged,’ Pardo said in a statement provided to DailyMail.com. ‘The prosecuting attorney is not seeking maximum sentence allowable by law. The defendant is a prior offender whose actions caused a 5-year-old girl to be in a coma and seriously injured three others.’

A Kansas City police officer who arrived at the scene of the crash reported he could smell alcohol and that Reid’s eyes were bloodshot, according to court documents.

Young returned home from the hospital in April of 2021, but was still struggling to ‘walk, talk or eat like a normal 5 year old’ in the summer of 2021, according to the family’s GoFundMe page. Her four-year-old sister was in the car, but not critically injured in the crash.

Young’s family has posted periodic updates about her condition on a GoFundMe page, which has raised $580,340.

‘Ariel is at home recovering, we hope that her being in a familiar place will help her remember things,’ read a mid-April, 2021 update from Ariel Young’s cousin, Tiffany Verhulst, on the family’s GoFundMe page. ‘She is doing physical therapy but as of right now she still cannot walk, talk or eat like a normal 5 year old. Thank you everyone for your continued support.’

The family had asked for help finding a wheelchair-accessible vehicle, which they were able to obtain.

‘This will make ariels (sic) new everyday life so much easier,’ Verhulst wrote.

The collision happened just days before the Chiefs played in the Super Bowl in Tampa.

‘The five victims of this crime are relieved that the defendant has chosen to plead guilty and are hopeful that the defendant receives the maximum sentence allowable by law,’ Tom Porto, the attorney for the victims, told DailyMail.com.

‘While Ariel’s physical condition has improved, she will be forever affected by this tragedy.’

Reid, who underwent emergency surgery for a groin injury after the crash, was placed on administrative leave. His job with the team ended after the Chiefs allowed his contract to expire.

Reid’s attorney, J.R. Hobbs, issued an apology on his client’s behalf in a press release in September.

‘He sincerely regrets his conduct and hopes and prays for the continued recovery for A.Y.,’ Hobbs said. ‘Mr. Reid sincerely apologizes to A.Y. and her family, and to his own family. He also extends his deep apologies to the Hunt family, the Chiefs organization and Chiefs Kingdom. Mr. Reid is sorry for his actions and hopes that his plea brings some sense of justice to all those he affected.’

Despite Reid’s plea deal, the family was still hoping he gets a maximum sentence. 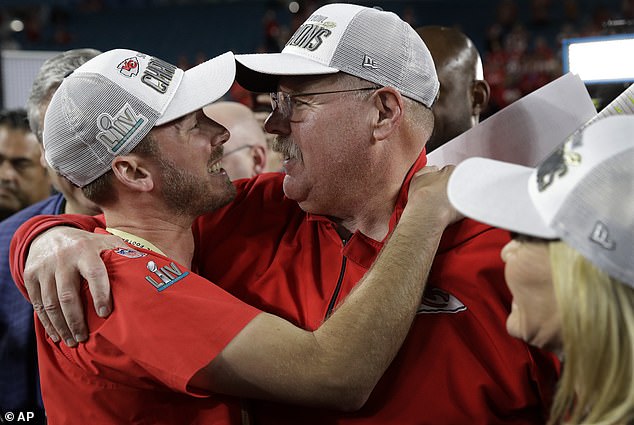 Reid (left) is the son of the Chiefs’ Super Bowl-winning head coach, Andy Reid (right). In this picture from February of 2020, the two are seen celebrating a Super Bowl win over the 49ers 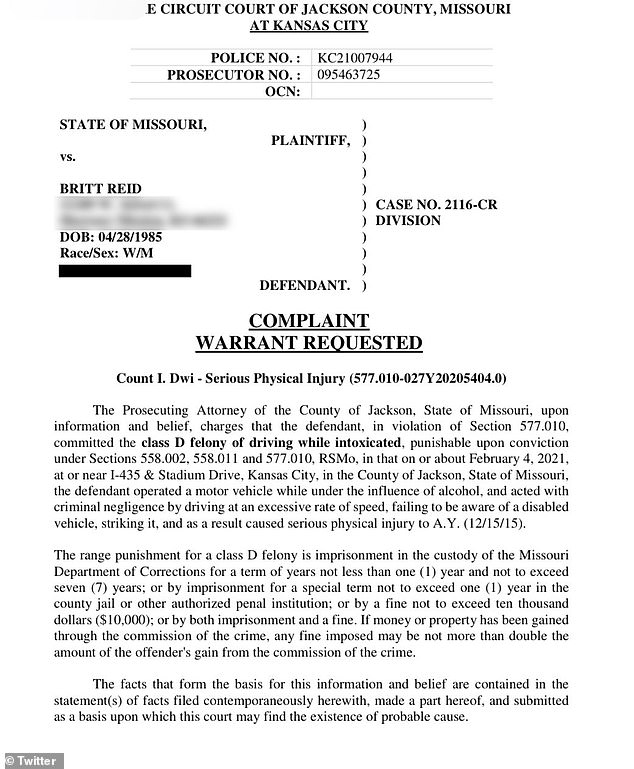 Britt Reid has been in legal trouble several times.

He was arrested in January 2007 in Pennsylvania a road-rage incident in which he pointed a gun at another driver, and he was sentenced to up to 23 months in jail and five years of probation after pleading guilty to charges of carrying an unlicensed firearm, simple assault, possession of a controlled substance and possession of an instrument of crime.

Seven months later, Reid was arrested and charged with driving under the influence, possession of a controlled substance and possession of drug paraphernalia. He pleaded guilty and was sentenced to up to six months in jail.

Reid began his coaching career as an intern for his father with the Eagles in 2009. He spent the next two years as a graduate assistant at Temple, his alma mater, before joining the staff in Kansas City.