With revelers in the electrically excited crowd proclaiming him “king” and straining for a glimpse of Otzma Yehudit leader Itamar Ben Gvir, an attendee at the party’s election night celebration might have been forgiven for thinking the far-right politician won Israel’s election Tuesday. And while Ben Gvir, who does not even lead his Religious Zionism-Otzma Yehudit joint slate, will not be prime minister this fall, in many ways he did win the night.

Within two years, Ben Gvir has catapulted from unelectable bogeyman to Cinderella story, driving an untold number of votes to Religious Zionism and making it the Knesset’s third-largest party and a likely senior coalition partner, if current projections stand.

Along the way, he has softened his firebrand rhetoric, though not his stances, bringing his extremist view of what it means for Israel to be a Jewish and a democratic state into the mainstream.

Former prime minister and Likud leader Benjamin Netanyahu is projected to form the next government, paving his way back to power by stitching Ben Gvir into an alliance with Religious Zionism’s Bezalel Smotrich and anti-LGBT party Noam, ensuring the maximum number of far-right votes to bolster his alliance.

Within initial results showing it contributing up to 15 of the Likud-led bloc’s projected 62 to 65 seats, Religious Zionism-Otzma Yehudit will be the second-largest party in Netanyahu’s right-religious coalition. From that lofty position, it is poised to make demands for ministries and far-reaching policy initiatives that can shape what it means for Israel’s self-conception as a Jewish and democratic state.

Ben Gvir said on Sunday that he plans to demand the public security ministry, which oversees Israel’s police and internal security. Despite being dismissed from enlistment into the Israel Defense Forces for his ultranationalist views as a teenager, Ben Gvir has carved out a platform steadfastly defending IDF soldiers. As part of his promises if made police minister, he would push for immunity for security officials, as well as ease IDF live-fire directives.

Ben Gvir, who has lionized Jewish terrorist Baruch Goldstein, has also pushed for deporting “disloyal” citizens and Arabs who attack IDF soldiers, as well as the death penalty for terrorists, a measure also backed by some members of the outgoing coalition. 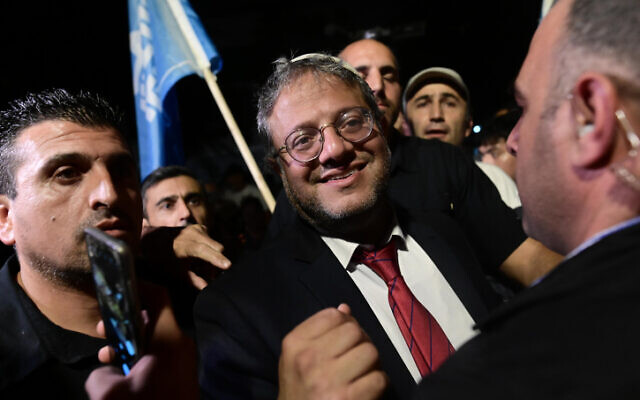 MK Itamar Ben Gvir, head of the Otzma Yehudit political party and activists protest in support of the deportation of asylum seekers in southern Tel Aviv, on October 12, 2022. (Tomer Neuberg/Flash90)

Ben Gvir’s focus on public security feeds on concerns of violence in the wake of last year’s rioting in mixed Arab-Jewish cities, which broke out during the May 2021 conflict with the Hamas terror group in Gaza, and a recent resurgence of West Bank terror. With safety a top issue for many, Ben Gvir’s tough-on-Arab-violence approach made him a popular vote-getter, especially among right-leaning Israelis, said Yair Sheleg, an expert on national religious politics at the Shalom Hartman Institute in Jerusalem.

But Ben Gvir’s view of security is often viewed as incitement, especially by Arab citizens of Israel and Palestinians, whose politicians have denounced him and his party. Underscoring the point, several of Otzma Yehudit’s supporters chanted “death to terrorists” – with “terrorist” sometimes used as a euphemism for Arabs – at the party’s Tuesday evening celebration.

Netanyahu, for his part, has in the space of a year evolved from saying Ben Gvir was unfit to be a minister, to saying mid-October that he “certainly can” be one, to on Monday saying he did not “disqualify” Ben Gvir’s candidacy for police minister – although he noted that there were several candidates.

Greeting supporters after his banner night, Ben Gvir – who has polled as the dominant persona in Religious Zionism-Otzma Yehudit despite Smotrich being its leader – said that “it’s time for us to go back to being the master of the house in our own state,” echoing oft-repeated campaign statements that Jews need to reassert their sovereignty in Israel.

Otzma Yehudit’s platform – now removed from its site – had called for encouraging undefined “enemies” of the state to emigrate.

His territorially-maximalist view also calls for Israel to assert its control over the  flashpoint Temple Mount – where the current status quo blocks non-Muslim prayer – and in the West Bank, which Ben Gvir and his allies have pushed to absorb into Israel, without extending equal rights or citizenship to the millions of Palestinians who live there.

Firebrand politicians have a habit of moderating their views once in government, and Ben Gvir has also tip-toed toward more conciliatory rhetoric, saying on Wednesday that although he is committed to a “fully right-wing government,” he plans to “work for all of Israel, even those who detest me.” 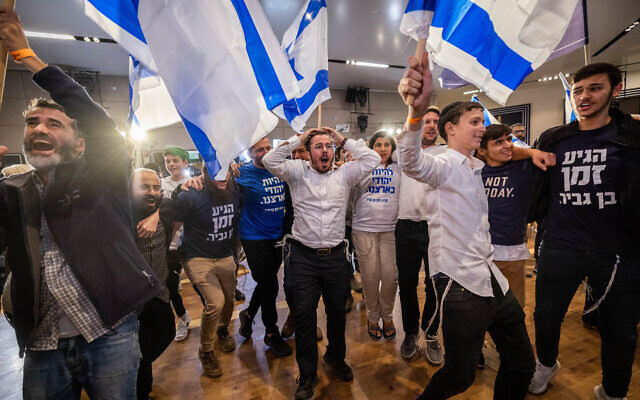 Supporters of the Otzma Yehudit party celebrate as initial election exit polls of are announced, at the party’s campaign headquarters, November 1, 2022. (Yonatan Sindel/Flash90)

In control of five of the slate’s top 10 seats, and the 13th and 15th spots should the party win that many votes, Otzma has reportedly mulled conducting coalition negotiations separately from Religious Zionism, though Smotrich rebuffed that possibility on Israeli TV Wednesday.

Smotrich has expressed interest in the defense, finance and justice ministries. Likud has said that it wants to keep the first two – considered senior posts – within its own party, leaving justice as the likeliest portfolio for the party leader.

Smotrich has derided the current judicial system as “sick,” and the Religious Zionism party has pushed for a wide-sweeping judicial reform package that mirrors some of Likud’s own policy goals. 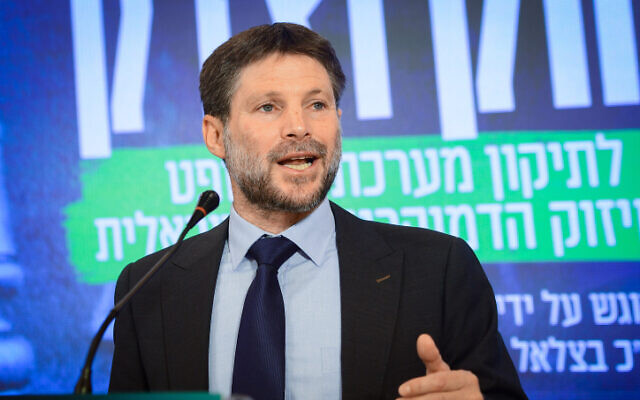 Top among them are reforms that would exert more political control over the judicial system, chiefly by creating a mechanism for the Knesset to override High Court vetoes of legislation ruled unconstitutional, as well as shift all judicial appointments to political control by packing the nine-member appointments committee with six politicians.

Critics have accused Smotrich and other judicial reform advocates in his corner of planning to run roughshod over the system instead of reforming it, whereas Smotrich insists that the reforms are necessary for maintaining Israel as “a Jewish and democratic state.”

Backing the effort will likely be the coalition’s ultra-Orthodox partners, which have long supported judicial reforms that will defang what many in their communities perceive as an activist court interfering in their religiously guided lifestyle.

Likud and its senior figures have also supported a spate of similar reforms in recent years, including moving Supreme Court appointments to be under government control with Knesset approval, and the ability to reinstate laws invalidated as unconstitutional with a majority of 61 MKs. 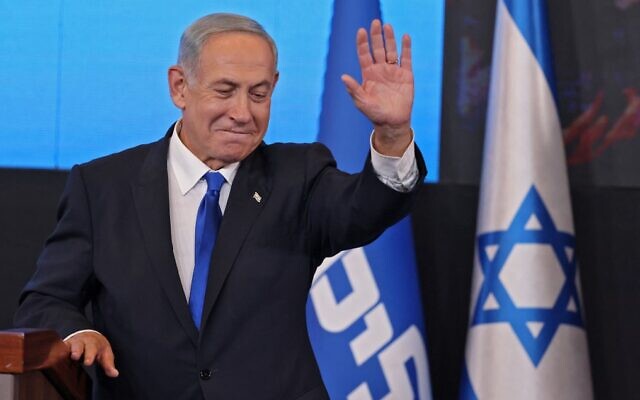 The most cynical charge against the ascendant bloc’s judicial reform efforts is that they might be wielded to extricate Netanyahu from his current graft trial.

Smotrich said his party wants to cancel the criminal charge of fraud and breach of trust, which applies to public officials who wield their influence when knowing that they are receiving a benefit in exchange, and is used in cases that don’t rise to the level of bribery. Legal experts, including Netanyahu critic Mordechai Kremnitzer, have attacked the charge as being too vague.

But were the charge stricken from Israel’s penal code, it would potentially cancel three of the four counts Netanyahu is on trial for, leaving only his bribery charge.

While Religious Zionism says it does not intend to use the reforms to allow Netanyahu to finagle a way out of legal trouble — and both Likud and Netanyahu are similarly adamant — political opponents have been doubtful.

Ben Gvir, on the other hand, has said that he would push for the passage of a so-called French Law, which would block a sitting prime minister from criminal prosecution.

Others have brought up the proposal in the past, though critics have noted that France also has a rule that would keep Netanyahu out of power anyway: term limits.