With the publication of the final election results Thursday night, the scale of the anti-Netanyahu political parties’ self-exacerbated defeat was thrown into sharp relief, as the final vote tallies showed just 30,293 votes separating the opposing political camps.

Although this gap represents less than one Knesset seat based on the total number of valid votes cast in the election, the incoming coalition will have a decisive eight-seat majority, with 64 of the 120 seats in the new Knesset.

According to the final results, the right-wing religious alliance of the Likud, Religious Zionism, Shas and United Torah Judaism parties received a total of 2,303,964 votes.

Combined with the votes received by Jewish Home, which failed to cross the 3.25 percent electoral threshold, the total number of votes cast for all parties which committed to the political bloc of incoming prime minister Benjamin Netanyahu rises to 2,360,757. (Jewish Home leader Ayelet Shaked, formerly of Yamina and the interior minister in the outgoing coalition, pledged during the campaign that she would ally with Netanyahu’s bloc if her new party made it into the Knesset.)

The eight parties of what might be termed the “anti-Netanyahu bloc” —  comprising the outgoing coalition parties, together with the majority Arab Hadash-Ta’al and Balad — attained near-parity, with 2,330,464 votes.

This figure includes 288,789 votes cast for the left-wing Meretz and anti-Zionist Balad parties, which both failed to cross the electoral threshold. 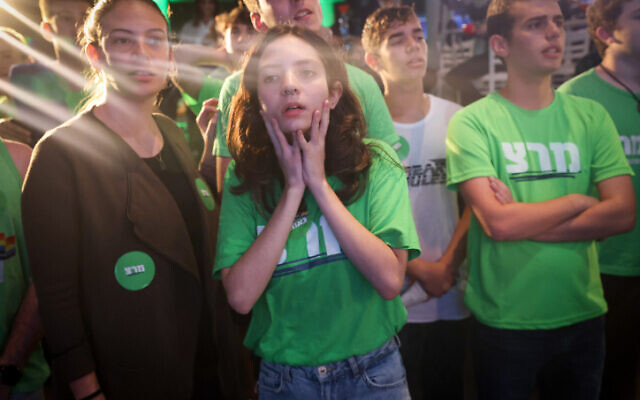 Meretz party supporters react as the results of the Israeli elections are announced, in Jerusalem November 1, 2022. (Flash90)

Meretz received a total of 150,696 votes, representing 3.16% of the vote, and was just 4,124 votes shy of what it needed to cross the electoral threshold and enter the Knesset.

These 288,789 votes amount to more than seven Knesset seats in a raw calculation of the number of votes which constitute one mandate, based on the total number of valid votes cast. (That does not automatically translate to 7 more seats, however, given the complex calculations by which seats are allocated — which are affected by parties clearing and falling beneath the threshold, and include “surplus vote” arrangements between parties that clear the threshold.) 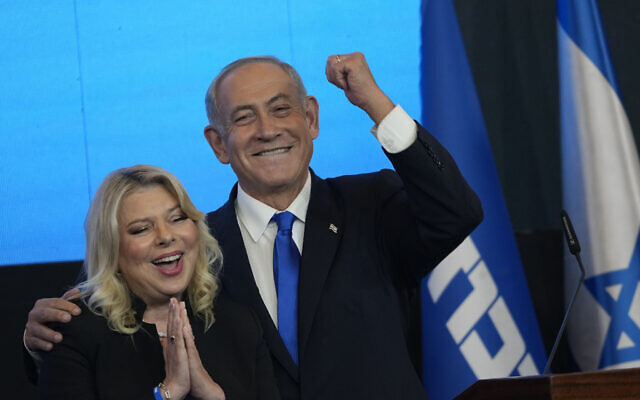 Likud leader Benjamin Netanyahu addresses supporters at the party’s campaign headquarters in Jerusalem early on November 2, 2022, with his wife Sara at his side. (AP Photo/Tsafrir Abayov)

Had Meretz run on a joint list with Labor, as it sought to do and as outgoing Prime Minister Yair Lapid urged, and had Balad not opted to break away from Hadash-Ta’al and run alone, it is likely that the division of seats in the new Knesset would have denied the Netanyahu bloc the outright majority it has now won. (Likely, though not certain, since there are no guarantees voters would have made the choices they made, or even voted at all, had Labor and Meretz merged and Balad not run alone.)

It would nevertheless have been extremely difficult, if not impossible, for the anti-Netanyahu parties to have established their own coalition, since Hadash-Ta’al and, especially, the Arab nationalist Balad would almost certainly not have joined any government. 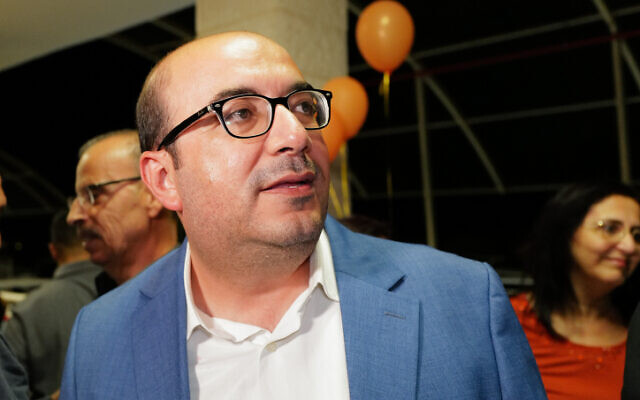 Balad party members at the party headquarters in Shefaram northern Israel, on November 1, 2022, as the results of the Israeli general elections are announced. (Michael Giladi/Flash90)

Despite strong pressure from Lapid on Meretz and Labour to unite on one list ahead of the election so as to avoid one of the two left-wing parties falling under the threshold, Labor leader Merav Michaeli resolutely refused to do so.

Lapid reportedly offered both Labor and Meretz reserved spots on his Yesh Atid party’s electoral list and guaranteed ministerial positions for Labor as part of his effort to persuade the parties to unite, but Michaeli accused Lapid at the time of harming the center-left bloc with these efforts.

Balad, which ran on a joint list with at least one other Arab party in the previous five elections, pulled out of a similar arrangement just one hour before the deadline for submitting party electoral lists to the Central Elections Committee on September 15.

By contrast, Netanyahu brokered a merger on the far-right between Bezalel Smotrich’s Religious Zionism party, Itamar Ben Gvir’s Otzma Yehudit party, and Avi Maoz’s Noam party — which all ran under the Religious Zionism banner, and won a combined 14 seats, making it the third-largest vote-getter after Likud and Yesh Atid. There had been concern in the Netanyahu bloc that Smotrich’s party might otherwise have failed to clear the threshold, and Noam was not expected to draw more than a few tens of thousands of votes. 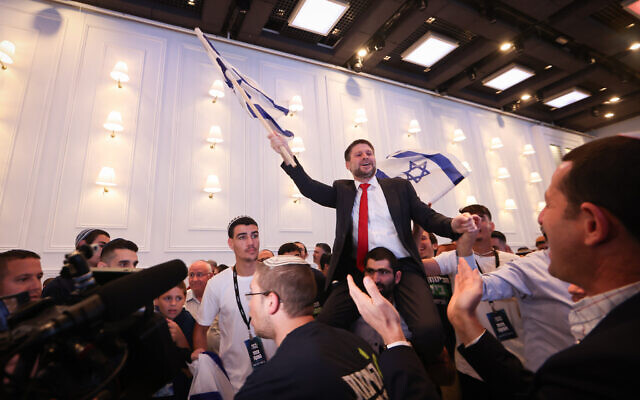 Netanyahu chose not to offer Shaked a direct incentive to drop out of the race, even though she consistently polled below the threshold, but disputed reports this week claimed that Likud had concluded that Shaked’s Jewish Home party was no threat to the Netanyahu bloc because it was drawing some of its limited support from voters who would otherwise have voted against Netanyahu.

In the April 2019 election, a similar sequence of events on the right deprived Netanyahu’s camp of the votes needed to form a government.

In that election, former prime minister Naftali Bennett’s New Right Party and Moshe Feiglin’s Zehut party both failed to cross the electoral threshold, wasting more than 256,000 votes in the process.

We’re really pleased that you’ve read X Times of Israel articles in the past month.

That’s why we started the Times of Israel ten years ago – to provide discerning readers like you with must-read coverage of Israel and the Jewish world.

So now we have a request. Unlike other news outlets, we haven’t put up a paywall. But as the journalism we do is costly, we invite readers for whom The Times of Israel has become important to help support our work by joining The Times of Israel Community.

For as little as $6 a month you can help support our quality journalism while enjoying The Times of Israel AD-FREE, as well as accessing exclusive content available only to Times of Israel Community members.

Thank you,
David Horovitz, Founding Editor of The Times of Israel

Already a member? Sign in to stop seeing this